Aakash Tablet Vs BSNL Penta Vs Olive pad – Which tablet i should buy ?

Hello guys, we are working for a new theme for mashking.net so that we can’t update the blog. however after the completion of work we’ll be back with more tech updates and reviews. I got lot of comments at facebook page asking about the differences in Akash tab and Bsnl penta and which tablet should i buy. So now here is the detailed guide on the tablet pcs which suits you best to buy.

Well, this is the question which comes in every persons mind that which tablet should i buy. seems to tricky because after the launch of Akash tab some of the companies also released cheap tablet pcs like Bsnl penta, olivepad, bizzbook and etc. Although all these tabs are similar in price tag and specs too. But the only problem is that which is best in performance and price. so that we can choose a tab and proceed to buy it.

The manufacturing company of Aakash 2 had failed to meet its initial demand of 1 lakh Aakash tablets and also the launching deadline in the market in past times. However, they have committed that their Aakash 2 (Ubislate 7+) will be on for the taking, in stores from March 2012 onwards and soon in the educational institutions for students at a half price. But it has been noticed that the mother company has changed its mind several times on previous affairs.

On the other hand, though being a brand new initiative, BSNL is very confident before the launch of Penta IS701R. They are eyeing on making their tab available in all stores by end of March. As Aakash failed to deliver its obligations on three occasions, BSNL’s tab may have the edge if they can deliver as proposed.

Apart from this two tabs olive also launched cheap tablet pc named as Olivepad V-TR200 which is similar to both the tabs but the only difference is it has a VGA camera. However it has been launched recently and they are delivering the products with in a short time of 30days from the day of order.

Aakash 2 was launched with comparatively higher and improved specs than the former which costs Rs.2999. Whereas, BSNL Tablet’s first model, Penta IS701R comes with a much better specifications than that of Aakash 2 at a eye-catching price-tag of Rs. 3,499. It comes with a data plan of 5GB for 60 days and the users can renew the same plan by paying a charge of Rs.750 only. Whereas in Aakash tablet, users will be able to access the net across any mobile network at Rs.99 for 2GB of data usage. And Olivepad doesn’t provide any data plan, we have to use data cards to browse the internet. So considering all the three tabs we can recognize that all has same specs and technical support.

Below is the picture of detailed differences in Aakash Tablet, BSNL Penta and Olive pad. 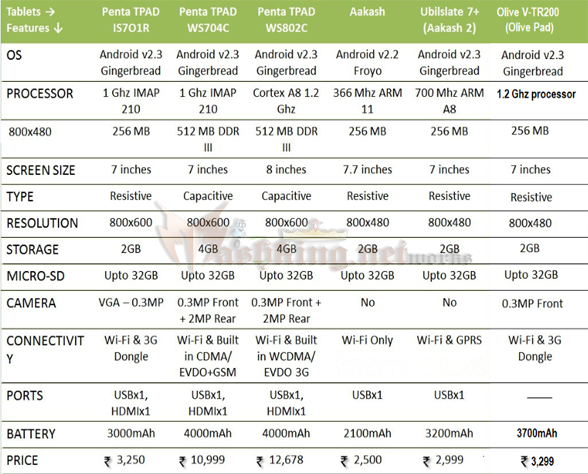 Note:- Bsnl penta comes with a data plan of 6 months free download and we can also unlock the tab to use other network sims. we should opt for the BSNL tab over the Aakash tab as it beats the former one in the main criterion- Specifications. But if your are not able to wait for these two tabs you can opt for Olive pad as they are delivering the Tabs with in a short time of order.

Hope this argument has rendered some useful information’s, helping you to buy the best low-priced tab among these two, keeping in mind your monetary constrictions.